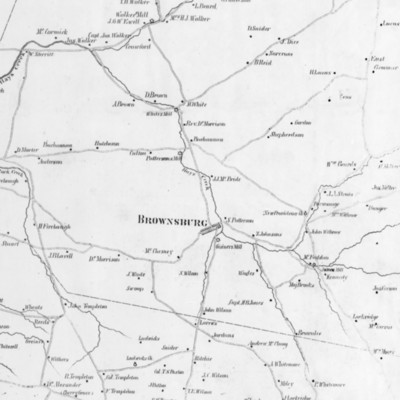 The Brownsburg Museum (Brownsburg, Rockbridge County, Virginia) and Washington and Lee University Special Collections would like to welcome you to “Civil War Brownsburg,” an online exhibit exploring this community’s Civil War experience, 1861-1865.

This exhibit was curated by:

The Brownsburg Museum Advisory Committee and the curators would like to acknowledge and thank the following organizations, businesses, families, and individuals for their contributions to this project: 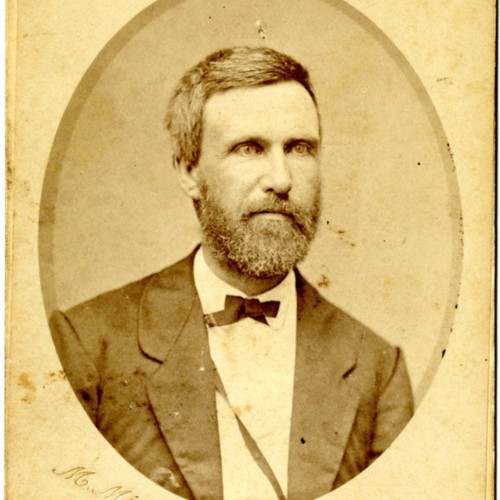 This collection serves as a comprehensive look at Alexander Lockhart Nelson. Born in 1827 in Augusta County Virginia to a Scotch-Presbyterian ancestry, Nelson was raised in Virginia and on July 5, 1855 married Miss Elizabeth Harvey Moore of Lexington, Virginia. Together they raised a family of three daughters and one son: Bessie Nelson (who later married Mr. Albert W. Gaines of Chattanooga, TN), Julia Nelson (later married Mr. Walter S. Forrester of Anchorage, KY), Frank A. Nelson, and Miss Evelyn Moore Nelson. In addition to raising a family, Nelson was a fully member of the Lexington community, serving as a Deacon at the Presbyterian Church, the same church in which Stonewall Jackson was a prior Deacon, and was later elevated to the Office of the Elder.

Nelson’s involvement with Washington and Lee started early; in 1846 he enrolled as a sophomore, graduating three years later with a BA. Becoming an assistant teacher upon his graduation, Nelson remained a staple of the mathematics department at Washington and Lee University until he was awarded Professor Emeritus in 1906. He spent all of these years at the University, aside from 5 years (1849-1854) he spent at the University of Virginia advancing his degree and teaching. Nelson, upon his retirement, was the longest serving faculty member of administrator by 32 years.

Nelson was one of four faculty on staff when Robert E. Lee arrived to take over the Presidency, Nelson had a unique and previously undiscovered perspective on Lee, and that is delved into in this exhibit. Here before Lee arrived, and present long after he had left, Nelson saw the full development of Lee’s changes and the lasting development of Lee’s true transformation of the University.

As an interesting local side note, the Nelson family home is now the Phi Gamma Delta fraternity house. Built in 1890 by Alexander M. Nelson, Alexander Lockhart Nelson’s father, it was the first house on this property, as the land sat empty before 1890. The land was part of a large plot originally owned by Colonel John T.L. Preston, who was influential in founding Virginia Military Institute and was a Rector of Washington College.

Serving an active and full life in the community, Nelson died in 1910 at the age of 73. He passed on the porch of his home on Preston Street, and is buried in the Stonewall Jackson Cemetery in Lexington.

The aim of this collection is to expand on the given background of Nelson, and highlight specific portions of his life. The collection has been divided into four main sections of information – his connection to Washington and Lee, his perspective on and relationship with Robert E. Lee, his contributions to mathematics (both at the University and theoretical), as well as a brief look into his personal life. This expansion of understanding is accomplished through the compilation and evaluation of these primary sources. Nelson was an invaluable member of the Washington and Lee community, and his both span of years as well as presence at a dynamic point in the institution’s history affords him attention. 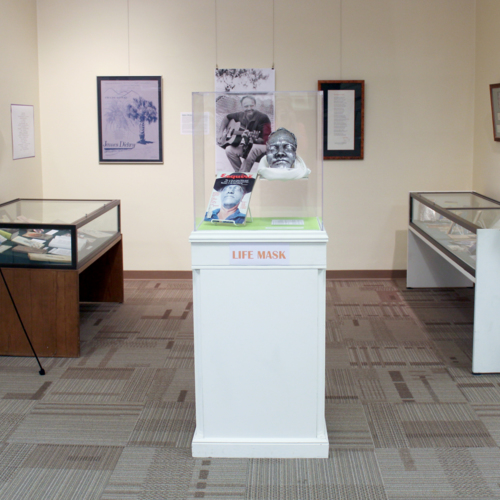 In the fall of 2015, Leyburn Library exhibited works from the Ward Briggs Collection of James Dickey. The exhibit was curated by Yolanda Merrill.
The Ward Briggs Collection of James Dickey was acquired from Dr. Ward Briggs ’67 by the University Library in 2014, and is housed in Special Collections & Archives. It is a treasure trove of resources by and about American author James Dickey. It contains first and signed editions of his work, translations of some of his novels, literary journals, scholarly publications, criticism, letterpress editions of his poetry, photographs, lots of original material on the making of the movie Deliverance, and even the life mask of Dickey.
The University Library, and in particular Special Collections, invites you to research this unique collection.
About the donor:
Ward W. Briggs is the Carolina Distinguished Professor of Classics and the Louise Fry Scudder Professor of Humanities Emeritus at the University of South Carolina. Dr. Briggs has been on the University of South Carolina faculty since 1973 as a professor of classics.
Asides from classics, Virgil in particular, Briggs is interested in the work of his late friend, Southern author James Dickey.  Briggs is the editor of The Complete Poems of James Dickey, published by the University of South Carolina Press in 2013. The Ward Briggs Collection of James Dickey consists of materials that Briggs collected over the years and used to prepare his book.
To see photographs of this exhibit, view the Photo Gallery. 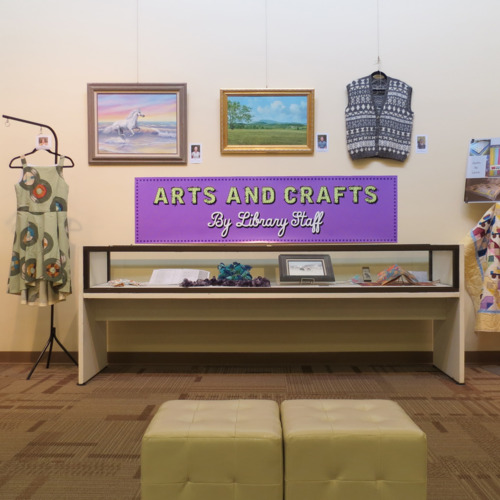 The University Library is composed of a talented group of information professionals who can answer research questions, generate metadata, or catalog new books!  This digital exhibit provides a window into who the library staff is outside of the building.  Many staff members are skilled creators of textile art, painters, illustrators, poets, or landscape designers.

To peruse showcased arts and crafts, browse the Gallery of Art.

This digital exhibit represents a physical exhibit that was assembled and displayed on Leyburn Library's Main Floor in the summer of 2015 and was curated by Yolanda Merrill, Humanities and Reference Librarian. 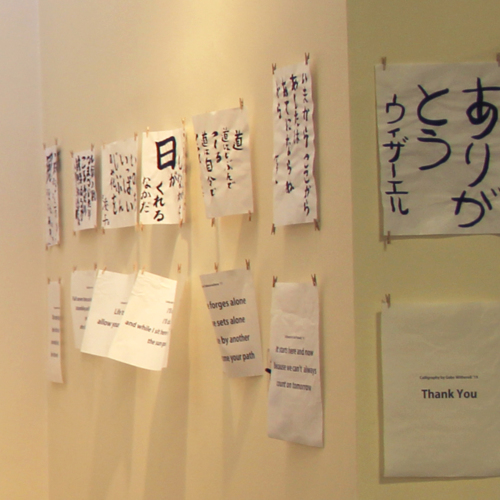 The Aida Mitsuo Calligraphy Exhibit was curated by the W&L Japanese Program and on display in Leyburn Library's Main Floor exhibit space during the month of January 2016.

Aida Mitsuo was a Japanese calligrapher and poet with a distinctive style of writing with brush and ink.  Many of his writings reflect his deep appreciation for life.  His words resonate with many people and have become a summons for us all to take a moment out of our busy lives to realize the preciousness of the here and now.  Aida’s writings became widely known with the 1984 publication of his book Ningen Da Mono (Because I’m Human).  In 1996 the Mitsuo Aida Museum opened in the Ginza district of Tokyo.  In 2003 the museum was relocated to the Tokyo International Forum.

During the 2015/2016 academic year, all students enrolled in Beginning through Advanced Japanese language classes at Washington and Lee University were asked to select an Aida Mitsuo phrase and render it in calligraphy.  The Aida Mitsuo Calligraphy Exhibit showcased the products of this endeavor. 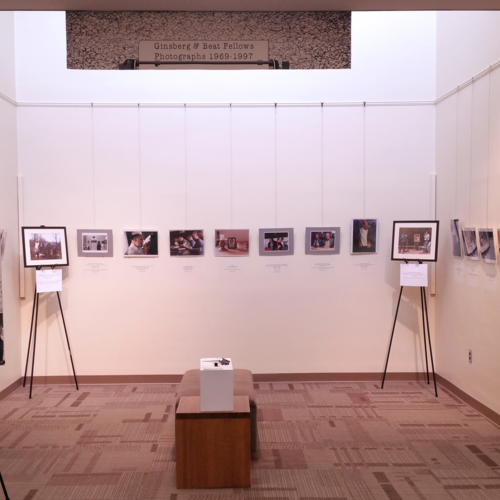 The "Ginsberg and Beat Fellows: Photographs 1969-1997" exhibit was on physical display in Leyburn Library from May-August, 2016.

All exhibited photographs were taken by Gordon Ball (Visiting Associate Professor of English) and document his time spent with several influential members of the Beat Generation–including Allen Ginsberg.

To view the photographs displayed within this exhibit, view the Photo Gallery.