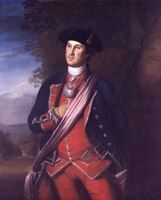 George Washington as Colonel in the Virginia Regiment, 1772

In 1897, upon his retirement as 12th president of Washington and Lee University, Custis Lee gave to the institution his 1772 family portrait of George Washington as Colonel in the Virginia Regiment by noted American artist Charles Willson Peale. It became part of the “painting gallery” that was created in 1875 and located on the stage wall of the auditorium in the university's chapel. The posthumous portrait of General Robert E. Lee by Theodore Pine was purchased by the university in 1907 and added to the gallery sometime after that. All portraits were removed in 1962 during the chapel’s restoration, and only those of Lee and Washington were rehung in the space.

The university replaced these historic paintings in October 2018 with portraits that portray its namesakes at the time when they made their respective contributions to the institution. Gilbert Stuart painted his Athenaeum version of President George Washington’s portrait first in 1796, the year Washington gave shares of James River canal stock to Liberty Hall Academy. Robert E. Lee served as the 11th president of Washington College when J. Reid painted his portrait in 1866, now on display.

This online exhibit features Washington’s portrait by Peale and Lee’s portrait by Pine and reveals some of the details beneath the surface of these two iconic portraits. The exhibition was originally installed in 2018 in the Lee Chapel Museum changing exhibition gallery as Undercover: Hidden Elements in Two Iconic Portraits.