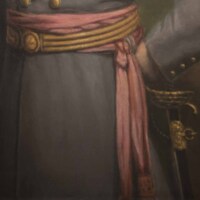 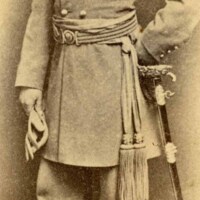 In a June 1907 letter to Washington and Lee University treasurer J. L. Campbell, Cornelia Sitwell Pine shared that she remembered Lee’s son corresponded with her husband to describe his father’s appearance, including his eye and hair coloring. In Vannerson’s photograph, Lee wears a military sash and holds the handle of his sword at his left hip. Mrs. Pine also reported that the silk sash and sword that her husband used as models for the painting actually belonged to H. F.  Grant of Asheville, North Carolina, where Pine lived and worked at the time. 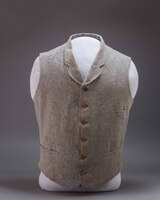 Notched collar gray wool vest with cotton lining and back

Constantly on display between 1928 and 1962, Lee's waistcoat suffered badly from light exposure and moth damage. After stabilization, it is on display for the first time in at least fifty years.

Beneath his military coat, Lee no doubt wore a wool vest like the one that can be seen in several photographs, including one taken during the summer of 1866 at Rockbridge Baths. This was less than a year after Lee arrived in Lexington to become the 11th president of Washington College.  Attributed to Adam Plecker and Michael Miley, this carte de visite documents Lee wearing a sack coat with his wool vest. The military buttons have been replaced with civilian ones. 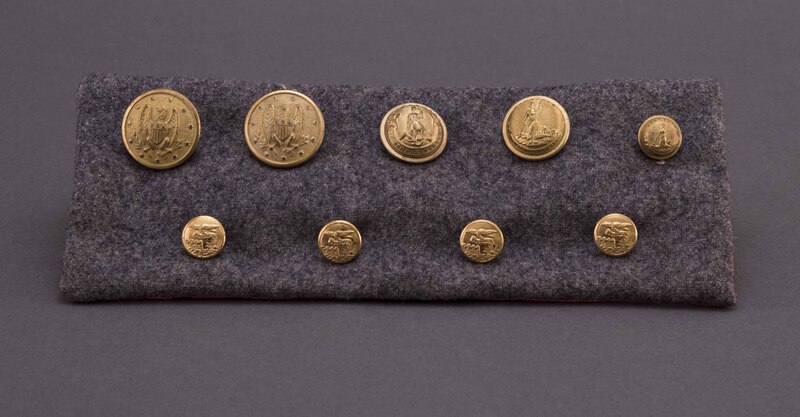 Two buttons in the Museums’ collection—unmarked Confederate staff officer’s buttons with “CSA” on the eagle’s shield (top left)—may have come from Lee’s military coat. These buttons are among several that descended in the Lee family and were given to the university in 1962. Also included are four marked “Robinsons Extra” (bottom row) that were used by Lee in the 1850s when he was in the U.S.Army Corps of Engineers.

Also included in the collection are three buttons (top right) that are decorated with the Virginia State seal. Made by Mitchell &Tyler of Richmond, Virginia, the smallest of these buttons may have come from Lee’s wool vest.

The university purchased this painting of General Robert E. Lee from Theodore Pine’s widow in May 1907 for $150. It was hung sometime after in the institution's "painting gallery" in the chapel auditorium, seen in this snapshot located to the right of the arch.